When I woke at 4:30am on Saturday morning (and couldn’t get back to sleep), I never imagined that in less than 2 hours I would hear the waves crashing against the rocks as I walked under the light of the moon to a lighthouse. I knew it was a bit crazy, but once I was on the road my car just guided me down highway 17 toward Santa Cruz. At that early hour, I was surprised at how many people were actually out. Heading to the gym? Taking the “drive of shame”? Either way, I was on an adventure. I wanted that sweet smell of the ocean and lolling sound of the waves.

So before I tell you about this adventure I will preface it by saying that this is an especially perfect trip if you are wanting to try a trip alone. You don’t need to hit the road that early, even if you sleep in will be just as remarkable. Take notes because this could be your next trip!

Ok, as I mentioned, I was on highway 17 heading toward Santa Cruz, California. It’s a beautiful drive, the darkened roads carve into the Santa Cruz mountains and you sway back and forth as you take each corner. A Starbucks “grande in a vente” was cradled in my cup holder and with each sip I knew this was going to be a fun morning. I had the GPS location dialed in, so my car led the way. I was getting closer to the water’s edge in the heart of Santa Cruz when I took a corner and saw the Boardwalk with its tangled roller coaster lit up. It was quite breath-taking. I pulled over and snapped this pic.

About 10 minutes later, I turned down a narrow road where I could hear the clanging of the sailboats as they bobbed in the water. Another sound chimed and it was the one I was listening for. The sound of a fog horn, off in the distance. A harbor light calling out to sea captains. “Beware, beware!” I had arrived.

The lighthouse I was looking for is the Walton Lighthouse and it has been lighting the way for over 40 years. I have always loved lighthouses. I’m not sure why, but I’m certain some psychologist would have a theory. For now, let’s say it’s associated with my addiction to the ocean which I mentioned earlier. Anyway, it’s an elegant, classic structure and according to my research can withstand a quarter million pounds of wave energy! Whow.

I parked by a quaint restaurant called “Aldo’s” where I would later have breakfast. When you’re looking at Aldo’s there is a path off to the right that leads out to the lighthouse. The sun was just barely lighting the sky. That mere light mixed with the glow of the moon created magical hues of purple, orange, blues.

I followed the path along the jetty where I could see Seabright Beach off to my right. There, I saw a man, jogging, a silhouette on the sand, moving rhythmically, his stride matching the movement of the waves…

The jetty is fairly long. At first it’s just large rocks that line the path. And then the rocks disappear and there are huge concrete structures, carefully laid to protect the path from the crashing waves. The ocean was fairly calm but every once in a while a wave would crash against those huge cement structures making me catch my breath. During my time on the jetty a few boats left the harbor. Their wakes cut into the smooth glossy water creating elegant slices.

I spent quite a bit of time out there. I snapped pics, took a number of deep, relaxing breaths and watched the sun crest the horizon and creep up into the sky. I also froze! It was beautiful, but very cold. By 6:50am I was starving and headed back along the path toward Aldo’s.

Truth be told, I had never heard of Aldo’s until a good friend recommended it when my Father (aka Papa Stan) came into town. You pass it on your way to the lighthouse and on the way back. If you go on a cool fall morning, you’ll get the added bonus of the smell of bacon and fresh brewed coffee which floats all the way to the lighthouse. 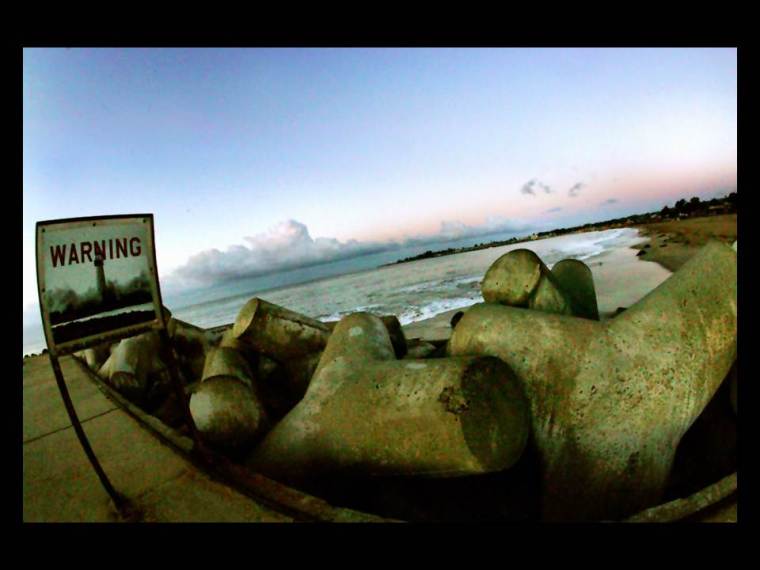 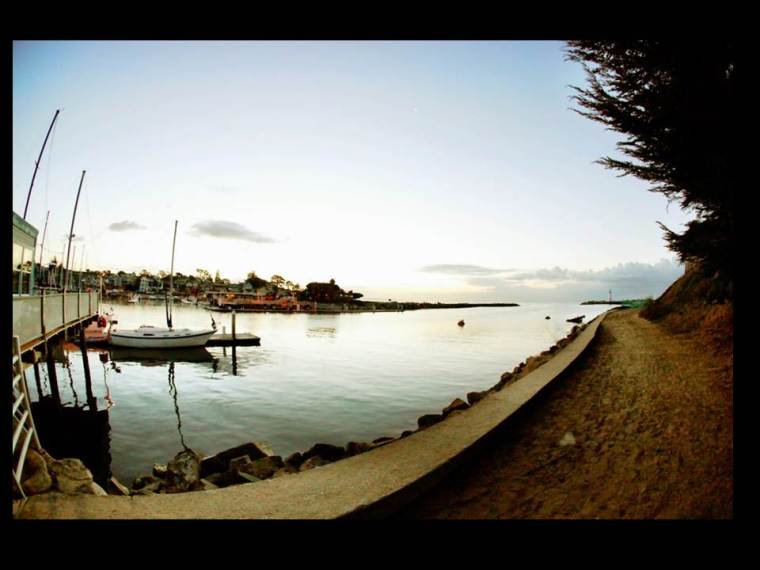 Aldo’s is a cozy place where a lot of locals spend their mornings. No worries, they will welcome you with a warm hospitality, even if you’re stopping by for the first time. If you’re traveling solo, you’ll feel very comfortable. There is an old, cast iron stove in the dining area which brings additional warmth into the room. I was the first through the door so secured a seat right next to it. I ordered my favorite – poached eggs, medium to medium well – whites cooked, yokes runny. (The whites can not be runny) This always seems like a science project for most cooks but they arrived, cooked to perfection. Along with my eggs, I had hash browns and bacon – everything was delish. 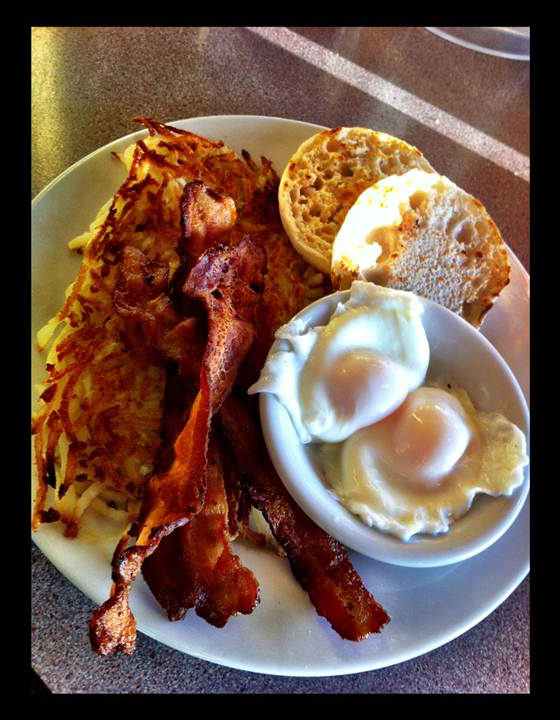 After breakfast, I walked over to the harbor. It’s right next to Aldo’s and in fact, surrounds the restaurant. It’s a lovely and I strolled along the docks, the sun creating perfect reflections in the morning light. Around 9am, the sun was up and people were out and about. It was time to take off and head up Highway 1. 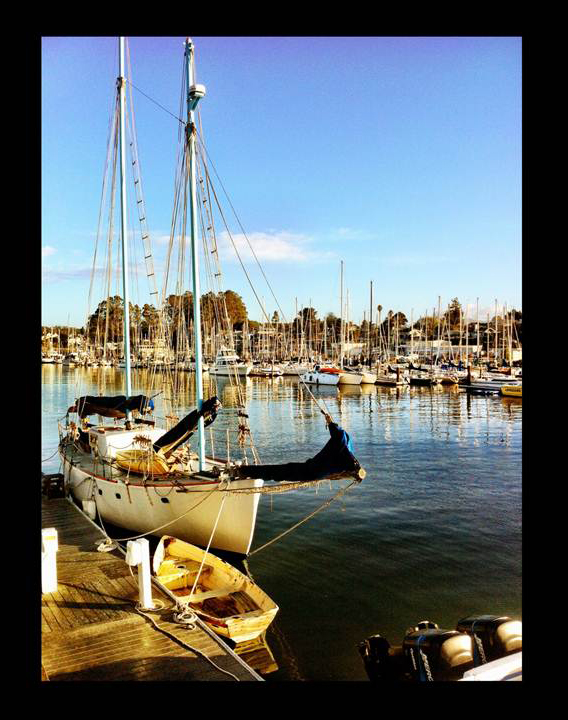 Thanks for the great service and wonderful food that morning!

Click “FOLLOW” on this blog and you’ll be the first to head up the coast with me!

PS – I truly hope you take this short trip. Watching the tip of the sun peak over the horizon while standing next to the lighthouse was breathtaking. I decided that if I did nothing else that day, my day would be perfect.

PPS – Note on the weather, regardless of when you go, bring a coat. Santa Cruz can get really cold, even in the summer.

Also, if you’d like to purchase a print of this beautiful area, please click on “Contact”. My photography is printed on aluminum. Utilizing an advanced process which infuses dyes directly into the metal, the colors / saturation are really amazing. In addition, your print will be displayed using mount blocks which float the image ½ inch off the wall.

©2013 Shelley D Spray – No content  on this site (including all photography) may be reused in any fashion without written permission from the author. 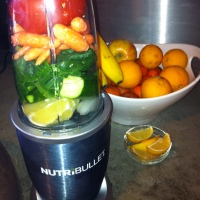 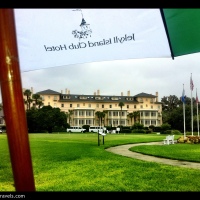 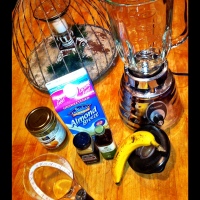 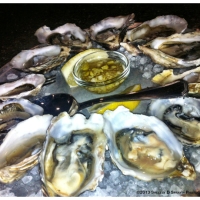